Narrowing Education to “16 Personalities”:  Did You Consent to Myers-Briggs in Your School?

Are you judging or perceiving?  Thinking or feeling?  Are you an introvert or extrovert?  Known worldwide, The Myers-Briggs Type Indicator® (MBTI®) assessment claims to have helped millions of people gain insights about themselves and how they interact with others.  According to the site, information from the test is used to improve how people communicate, learn, and work while providing a powerful framework for building better relationships, driving positive change, harnessing innovation, and achieving excellence. ”The MBTI assessment makes Carl Jung’s theory of psychological type both understandable and highly practical by helping individuals identify their preferences”, but discloses it should never be referred to as ‘a personality test.’

It’s just a measure, a return of data, right?

But who’s administering and interpreting your answers could raise questions, especially when it’s your child taking these kinds of tests (or “indicators”) while in school and without parental knowledge or consent.

According to the Washington Post, roughly 2 million people a year take the Myers-Briggs Type Indicator.  It has become the gold standard of psychological assessments used in businesses and government agencies including the State Department, the Department of Veterans Affairs, the CIA and nearly every federal department you can name, including the EPA.

This multimillion-dollar business is built around the concept that everyone fits one of 16 personality types. In the past 20 years, a plethora of regional sales teams now pitch to organizations on how they can use Myers-Briggs, including educational institutions.  There is a lot of money to be made with individual tests, supplemental guides and tool kits starting at a mere $15-$40.  Want to become a certified administrator of the test?  Pay $1,700 for a four-day training class.

According to Adam Grant, a professor of industrial psychology at the University of Pennsylvania’s Wharton School, what is concerning is “the cultlike devotion” many consultants and practitioners have regarding this test without examination of the evidence.  The tests themselves can be administered it seems by anyone today.

Which is precisely a concern when students at the Minnetonka High School were administered an on-line “16 Personalities” test to freshman during English class.  But it didn’t stop there – the test also followed up to a separate battery of on-line survey questions asking everything from the students city, home life and living arrangements as well as number of siblings, to what they think what style of learning they do best.

Traditionally, a psychological assessment is something that’s typically done in a formal manner and only by a licensed psychologist.  Depending upon what kind of testing is being done; the test is usually performed in a psychologist’s office and consists of paper-and-pencil tests or on a computer for ease-of-use, and typically lasts 1 ½ hours to a full day.

In addition to primary types of psychological assessment, other kinds of psychological tests are available for specific areas such as aptitude or achievement in school, career or work counseling, management skills, and career planning.  Perhaps you remember taking Meyers Briggs when making a transition in jobs.

Another example of career placement begins with the ACT Explore test for 8th graders which gives a 72 questionnaire at the end of the test – asking everything from if they like to mow the lawn, to if they would like to work for a political campaign.  Today, however, we’ve entered the world of computer adaptive testing and “individualized learning” via the technology freeway found in schools under the guise of Common Core.

Minnetonka board member Pam Langseth feels this kind of testing is necessary in order to better determine for the student what learning styles are best suited for them.  However, there was little response when asked if she felt it was ethical considering that teachers are not trained, nor licensed psychologists in the schools.  Ms. Langseth did point out we wouldn’t know what the results of this new system would show for at least another 10 years.  This was an interesting response being that it is the exact same response Bill Gates has given numerous times on Common Core.

If doctors or psychologists were to release student information like this following such a test, they would be fined at least $100,000 for each instance AND could lose their license because of a breach of confidentiality.  So how then do schools knowingly get away with it?

The new FERPA changes in 2012 actually violate student and family privacy.  FERPA, The Family Rights and Privacy Act, an act that once protected student and family information was completely gutted under Secretary of Education Arnie Duncan and signed into executive order by President Obama.  What does it mean?  Student information can now be accessed by corporations (stakeholders), school personnel (including volunteers) and any other entity that the state approves.

And what does the personally identifiable information about your child include?  Basically anything you provide.  According to Anita Hoge for Pennsylvanians Against Common Core, “The personally identifiable information includes information on every student’s personality, attitudes, values, beliefs, and disposition, a psychological profile called Interpersonal Skills Standards and anchors…This data has been illegally obtained through deceptive means without the parents’ knowledge or consent through screening, evaluations, testing, and surveys. These illegal methods of information gathering were actually fraudulently called ‘academic standards’ on the Pennsylvania Department of Education website portal.”

In a nutshell, it is a pre-K to workforce, cradle to grave data system.  Information is shared with the feds through SLEDS (state longitudinal education data system) and not only is a violation of privacy, but a violation of civil rights through deceptive means.

It is crucial for parents to understand that Common Core does not state which public school employees are to administer or interpret these tests.  Common Core also doesn’t allow for individualized needs of traumatized children, nor provide relief from assessments which can create anxiety, depression and avoidance symptoms.

Dr. Thompson points out that while the accuracy of psychological testing has progressed in the last 10 years; we need to question organizations or individuals chosen by the government who use this data to develop highly accurate predictive tests while not having any stated ethical procedures, guidelines, or institutional controls.

The question is obvious:  What then exactly are they trying to “predict”, and, without written parental consent?

Parents still have a voice and have a right to opt their child out of such testing.  Schools are required to disclose and notify parents of these tests – disclosure via the school’s on-line academic system is not an acceptable means of notification.  Under Minnesota statute 120B.20 parents have a right to review curriculum, which would not be limited to surveys, as the surveys – in the case of Minnetonka – were clearly being used during regular classroom time to determine a student’s psychological profile in the name of education.

Educate your child to look for surveys, questions or testing such as this including end-of-the semester or year teacher surveys in the classroom.   It is important you write or speak your concerns with your child’s teachers and principals, school guidance counselor as well as district superintendents and school board members. 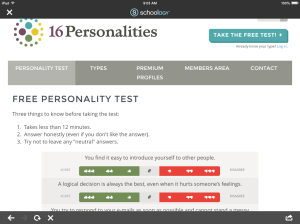 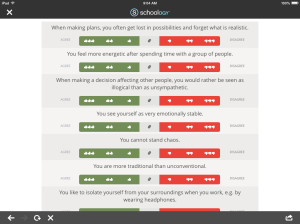 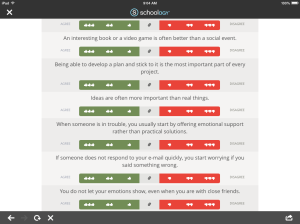 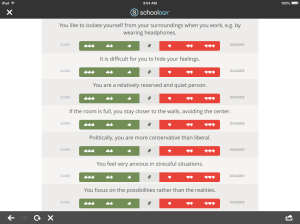